Pretty in Pink: Disney Princess Dresses You Can Cosplay If Pink Is Your Color

As a Disney fan ever since I was a kid, the first characters I look out for when visiting Disneyland are the princesses scattered around Fantasyland. As a kid, I’ve always said I wanted to be a princess because of them. When I grew older, I realized this didn’t mean marrying into a royal family and wearing pink dresses all the time; instead, it meant being a strong and independent woman who could save herself.

If I could rent Disneyland all to myself for one day, I’d gather all the princesses and take a group photo with them. Unfortunately, I don’t have the funds for that (nor will Disney allow it), and on a regular crowded day, it’s unlikely all princesses can be gathered for one photo when other kids and adults young-at heart will want to crowd and take their own photo as well.

As someone who cosplays, I don’t really intend on cosplaying all the Disney Princesses in their official outfits. Admittedly, some outfits like Jasmine and Moana wouldn’t flatter my body type and I’m not confident enough to wear something like that, while the yellow colors of Snow White and Belle don’t look good on my skin (I’ve rarely been able to rock the color yellow). And because Pocahontas and Tiana represent people of color, I don’t want to be accused of whitewashing these iconic characters and leave that to women who can better portray the character.

Personally, I look good in dark colors (Rapunzel, Cinderella, and Merida) and some shades of pink. Based on the official roster of Disney Princesses, those who want to look girly and ultra-feminine in pink don’t really have a lot of choices. But if you want to do something different and have a bit of knowledge on the rest of the Disney movies, you and I know that there are plenty of pink outfits you can cosplay.

Princess Aurora’s pink dress from Sleeping Beauty is arguably the most iconic pink dress in the Disney Princess franchise, but other people may remember the dress being blue. Nope, you aren’t forgetting details from the movie, but you are (in my opinion) on the wrong side of which dress color is better.

In the movie, fairies Flora and Merryweather attempt to make Aurora a dress for her 16th birthday. Having lived without magic for 16 years to hide their identities, they underestimate the difficulty of creating a dress fit for a princess and their first dress comes up, well… you be the judge. 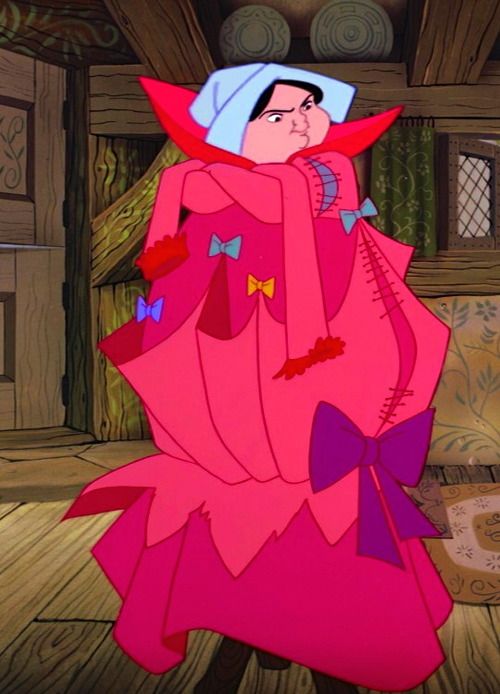 (You can also cosplay this dress too, if you don’t want a traditional pink Disney Princess dress.)

With a hideous dress and a cake propped up by a broom, the fairies decide to use magic to create a gown and cake worthy of Aurora’s special day. 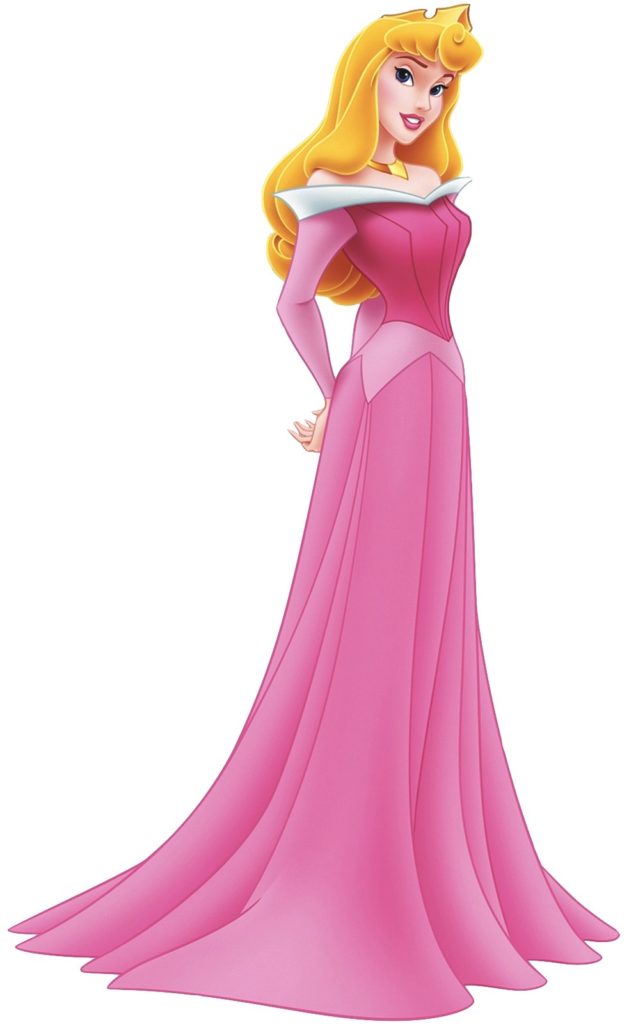 However, Flora and Merryweather disagree on the color: Flora wants a pink dress for Aurora, while Merryweather wants blue. They get into a color fight which, unfortunately, attracts the attention of Maleficent’s pet searching for signs of Aurora or the fairies. Before Aurora arrives, Merryweather has the last stroke of her wand and changes it into blue. But as the film ends, Aurora dances with Prince Philip, and the two continue arguing over the color, we see that Aurora’s dress is pink before the storybook closes. And because Aurora’s dress is pink in most of the Disney Princess photos, we’re going to accept that her dress is canonically pink. Also, fun fact: the argument between the two fairies is based on a real-life agreement between the movie’s animators on what Aurora’s dress color should be.

Here’s an easy DIY video on how to build an Aurora dress cosplay. However, this dress involves a tutu and is much shorter and tighter than Aurora’s dress. At least it’s much easier to walk around than with a full skirt.

But if you want to go even further than your traditional Aurora cosplay, might I suggest wearing the Aurora dress after the color fight? 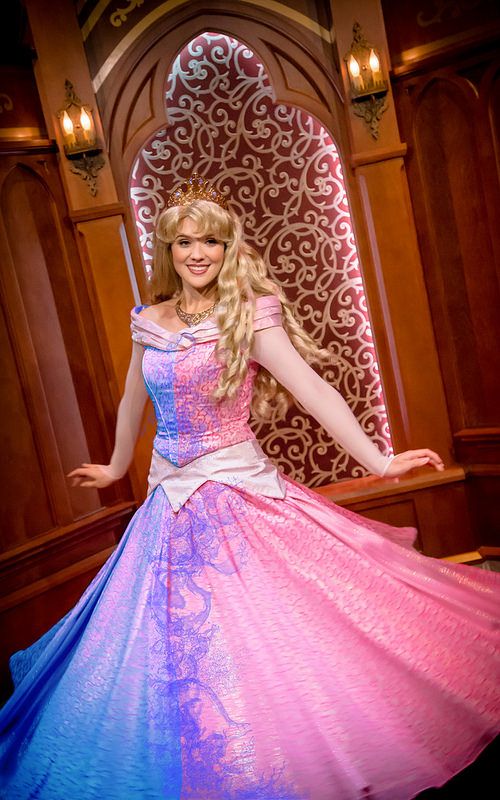 While Ariel is more known for her green fishtail and purple clam bra from The Little Mermaid, in Disney Princess photos, Ariel in her human form is wearing the pink ball gown used when she has dinner with Prince Eric. It’s arguably not as memorable as the dress she wears when she and Eric share an intimate moment in a boat, but if she’s going to stand beside 11 other princesses, that simple everyday dress simply cannot do.

After striking a deal with the sea witch to get legs in exchange for her voice, Ariel finds herself on the shore and saved by Eric. After taking her in, she is given clothes and is treated with hospitality. Eric doesn’t know that Ariel was the one who saved him from the shipwreck and assumes she is just a mute girl in need of assistance.

Here’s a comprehensive video on creating your own gown like this. 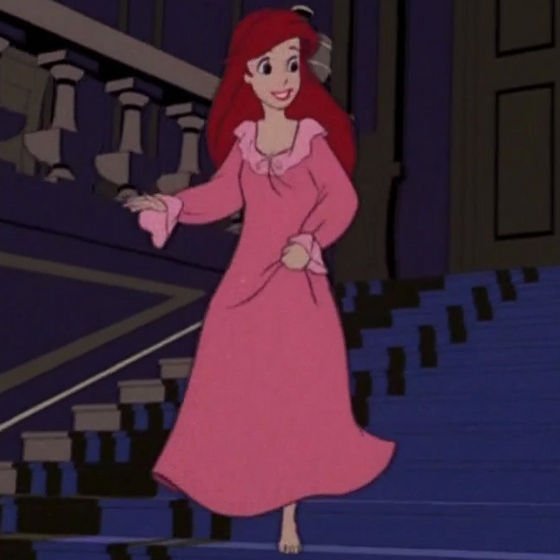 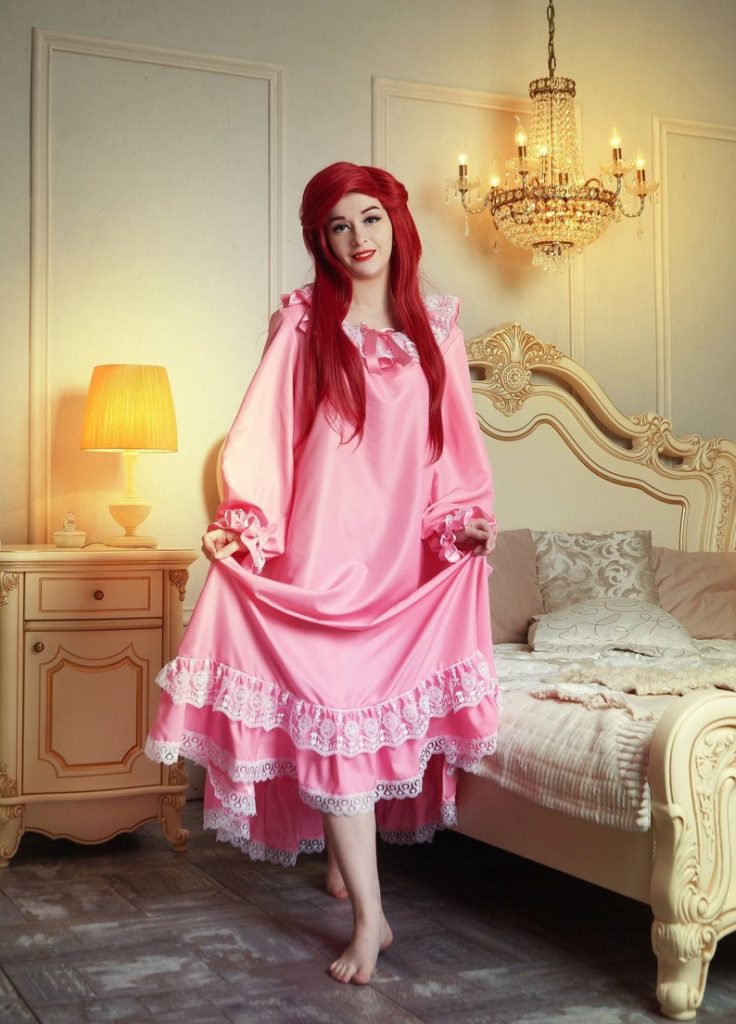 Ariel wears another pink outfit in the film: a pink night gown she uses to sleep on a human bed for the first time. It’s not a formal dress, but given the modesty of the gown at the time, it’s perfectly acceptable to walk around comic con events or just any costume party. It’s best if you carry a metal fork with you and comb your hair with it every now and then so people can get the reference, though. If you can’t make the nightdress yourself, here’s an Etsy seller who can make a pretty good handmade replica of Ariel’s outfit.

Going to an event or costume party in Cinderella’s iconic blue ball gown has become too commonplace for princess-themed costumes. It’s pretty, but if you want to turn heads, why not get the dress designed by mice? It’s a lot more cringe-worthy with the giant bows, but fellow Disney fans are likely to get the reference. The best part? If you have two friends willing to go as Cinderella’s stepsisters, you can turn your costume into performance by having them rip your frilly gown to shreds.

Those who aren’t fans or remember Cinderella that well might have forgotten that Cinderella was initially supposed to wear pink to Prince Charming’s ball. When their household receives the invite to the ball, Lady Tremaine allows Cinderella to go under the condition that she finishes her chores on time – something she knows Cinderella can’t do and have enough time to make her own dress. When Cinderella realizes this, she feels sad and her mice friends take pity on her. Wanting to help, they make the dress while she works. They take items Cinderella’s stepsisters discard to design her dress. However, when Cinderella presents the dress to her stepfamily, her stepmother gets the girls to ruin the dress, leaving her unable to attend.

You can wear this dress two ways: one is the dress in its fixed form. The design looks easy enough to make if you have basic dressmaking skills, but you can also buy the dress on Etsy. But if you’re thinking about turning it into a performance piece you intend to destroy later on, it’s best to make your own with low-cost materials since they’ll be easier to tear apart later on.

Or, you can skip the entire ripping part and just go for the ripped dress immediately. If you’re attending a fairytale-themed event and happen to find a fairy godmother somewhere in the crowd, plus points if you can get them to play along.

Belle’s most iconic dress is the yellow ball gown she wears as she dances with Beast in the ballroom. However, during her stay in the castle, she was seeing wearing other clothes, including this piece as she and Beast went outdoors during the winter. 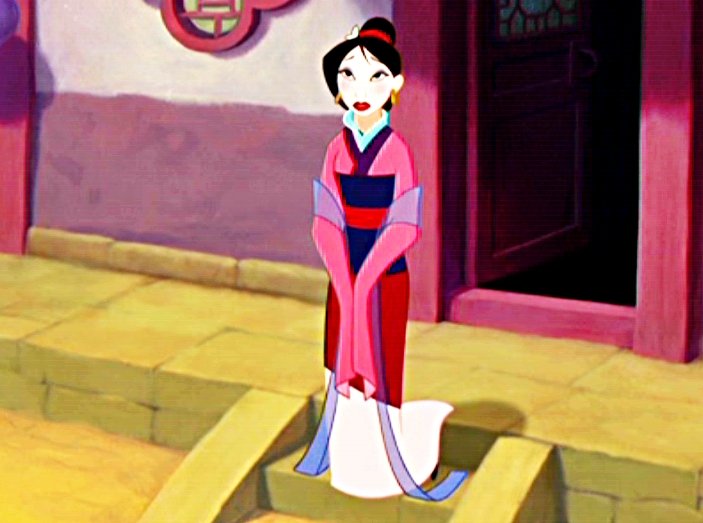 Fa Mulan’s official Disney Princess outfit is the yellow and green one she wears upon her return home as the savior of China. However, fans won’t forget the pink, red, and white attire she wore during her “scarier than the undertaker” meeting with the matchmaker. In an attempt to bring honor to her family, Mulan joins a handful of other girls to impress the matchmaker to find herself a husband.

While it may be difficult for non-Asian women to wear this traditional outfit (some may even call it cultural appropriation if they don’t get the Mulan reference), if you really want to wear this, there are plenty of Etsy sellers selling replicas of Mulan’s attire. Or, if you don’t feel comfortable wearing a traditional Chinese attire as a costume, there are different versions of it in the form of skater dresses (the colors are simply printed on the fabric instead of actual multiple pieces) and long gowns resembling the attire. Take a look at this one below by Etsy seller Darling Army – it’s less tighter than the real thing.

While the whole point of cosplay is to do your own take on characters, some of us want to stay as true to the character’s outfit onscreen as much as possible. If pink is your color, consider cosplaying in some of these outfits. Did we miss out on any other Disney Princess costumes? Let us know!