How Madonna Influenced Makeup Trends in the ‘80s 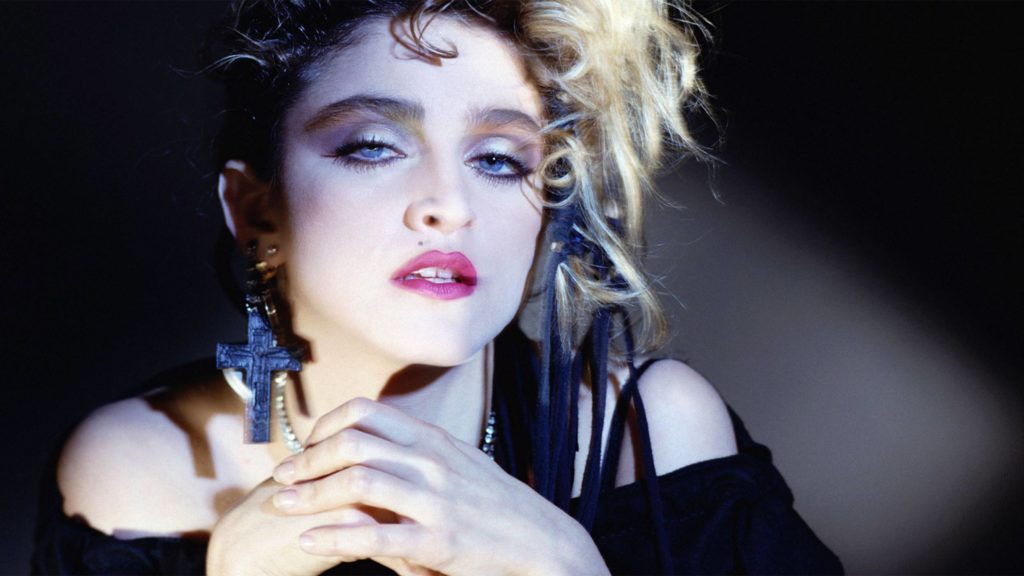 Madonna’s rise to stardom can be traced back to the 1980s, when she released her first hit singles, “Everybody” and “Burning Up” in 1982 and 1983. Nobody knew it back then, but her hits would eventually lead her to become the Queen of Pop, influencing western music and pop culture for the next 30 years.

Aside from the fact that many successful artists look to her groundbreaking music as inspiration, Madonna has also influenced the realms of makeup, style, and fashion in the ‘80s. ‘80s makeup was known for being a time of bold colors and wild hair, and if you look at Madonna’s timeline of looks during that decade, you can see how much of Madonna’s ‘80s makeup influenced the trends of the time.

Overview: Madonna’s Makeup in the ‘80s

Like her music, Madonna was known to push the boundaries and often reinvent herself in terms of style and makeup. During the ‘80s, she was this icon who had a religious name contrasted by a wild and alluring persona draped in costume jewelry and eye-catching pieces.

And as fashion and makeup evolved in the ‘80, so did Madonna’s looks. And with a growing fan base from the younger generations of the time, plenty of young women were emulating the way she dressed and put on cosmetics.

If you’re familiar with the ‘80s makeup styles, you know it’s all about the color and bold looks. If you’re interested in recreating the retro look at the time, your makeup kit should have large amounts of color and stray away from the no-makeup makeup look. Some of the must-have cosmetics of the ‘80s included:

The ‘80s were a wild period of color and sparkles, and while this may seem like a long list of makeup, that is the list of what it took to copy Madonna’s ’80 makeup.These are just some of the ‘80s makeup trends you might be familiar with and how Madonna was able to bring that look into the spotlight.

Brooke Shields may have created the ‘80s makeup trend of natural-looking bold eyebrows, but Madonna continued the trend and made un-plucked and untamed eyebrows popular in the late ‘80s. This was her look in the 1987 film Who’s That Girl.

What’s interesting though is that while we saw the evolution of eyebrow trends over the years, lately, the trend has been going back to these type of brows. Probably not as thick as some women draw them on, but natural-looking eyebrows that aren’t as sculpted are becoming a popular trend once more.

The ‘80s was a time of big hair styles. Because of the loud and colorful makeup trends, it was easy for one’s hair to underwhelm the effects of the makeup if it wasn’t as loud as what was on a woman’s face. That meant giving your hair more volume, and one of the more popular ways of doing so was teasing your hair so that your hair looked way bigger than it actually was.

Having risen to fame in her early 20’s, Madonna was in a position to start trends. While older adults may call her hair during the ‘80s messy, Madonna went for teased looks that made her hair look wild and unruly (though she did it so well that it looked like she didn’t have a hair out of place) that matched with her stage persona.

While the ‘80s were a time of heavy foundation that emphasized flawlessly perfect skin, the only acceptable flaw were moles, or “beauty marks” as they were popularly called. This may have been because of women like Marilyn Monroe who managed to turn her popular facial mole into one of her more memorable facial features.

Though Madonna did not have a beauty mark on her face, she may have started or made popular the trend of wearing faux beauty marks. After the 2000s, she no longer has the same mole above her lip, so it’s safe to say that her beauty mark of the ‘80s wasn’t real. Since then, it was popular for women to draw on faux beauty marks – though not everyone could actually pull it off.

Before Ariana Grande coined the high ponytail, it was a popular trend for teens and young women of the ‘80s. While Madonna didn’t create the look, she was one of many celebrities who created a type of high ponytail many of girls ended up copying. For her, it was the messy high ponytail seen in her 1985 film, Desperately Seeking Susan. It strayed away from the trendy scrunchie and was another hairstyle many other girls (and later on seen in pop culture) would copy.

And while Madonna would go on to have other hairstyles, it wouldn’t be the last time we see her in a high ponytail. We would see her go on to sport the high ponytail in several of her concerts and other events.

Before the no-makeup makeup look trended, full-coverage makeup was trendy in early 2010s. Prior to this year, it was also popular in the ‘80s when foundation was thick enough to hide the smallest flaws and achieve a perfectly even-toned face.

Not only was Madonna was at the forefront of this trend, but she also changed the trend towards the end of the ‘80s. Originally, the trend was to wear heavy foundation to hide all imperfections. But Madonna began sporting lighter face foundation that was evidently much lighter than the rest of her body. If it were anyone else, it may just have been chalked up as a major style malfunction. But with Madonna, it looked like a stylish was to draw the attention to her face which led to a trend for a few years.

Madonna’s stardom influenced more than just the music and the artists who followed in her footsteps. As a singer whose presence could easily turn heads, her style choices – including her makeup – influenced people as far as the beginning of her career in the ’80s. While Madonna’s ‘80s makeup is a far cry from the style she shows today, her fans would definitely love to see her rocking her old ‘80s makeup and fashion even just once more.

But if you want to go the extra mile, though, why not try recreating some of her most popular looks? Take a look at this YouTuber who could transform into one of Madonna’s best ‘80s looks.