From Elizabeth to Eugenie: A Rundown of the Best Royal Princess Wedding Dresses 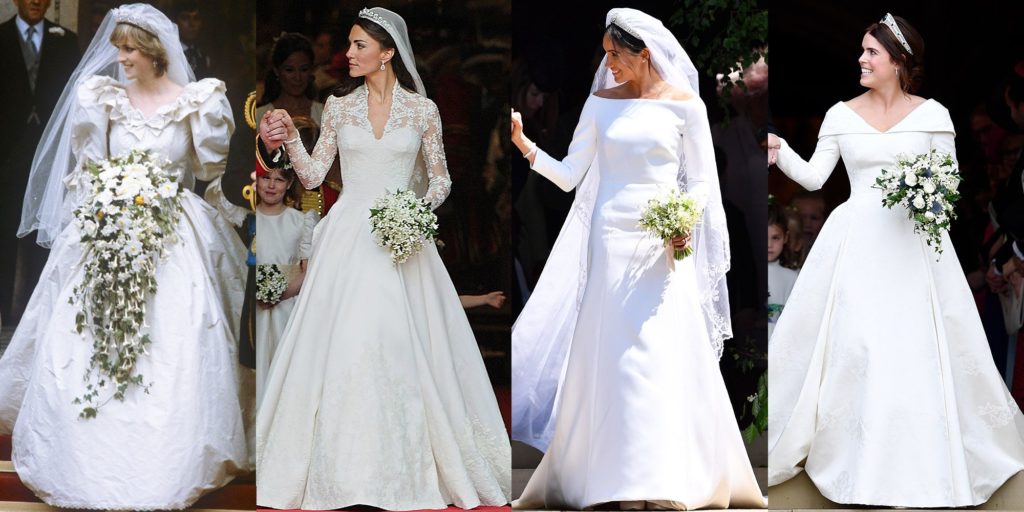 The fourth season of Netflix’s The Crown is causing a stir among fans and interested by-standers as the show welcomes one of the United Kingdom’s most memorable monarchs.

And when we talk about Diana, the first thing that comes to mind (apart from her tragic marriage to Prince Charles) is her wedding day, specifically her wedding dress — aka the most royal of the entire princess wedding dresses.

But whereas Princess Diana’s wedding dress is worth a whole dialogue of details, other royal princesses before and after also wowed the crowd with their satin wedding dresses, fancy (and incredibly long) veils and gorgeous wedding makeup.

To say that only Diana inspired little girls to dream of their wedding day would be to disregard the beauty that is the selection of wedding dresses worn by famous royal princesses.

Instead of focusing only on Lady Diana Spencer’s dress, here’s a royal rundown of ALL the memorable wedding dresses worn by popular royal brides — from Elizabeth to Eugenie.

Note: this analysis doubles as a guide for brides shopping for their wedding dress, too!

In 1947, Her Royal Highness (then) Princess Elizabeth was one of the first monarchs to marry out of love, not out of duty or bloodlines. Despite the issues surrounding her relationship with Philip Mountbatten, Elizabeth accepted his engagement and flounced her happiness on her wedding day, November 20, 1947.

Elizabeth’s love for Philip wasn’t the only factor for her radiance. The soon-to-be-longest-reigning-monarch’s wedding dress also contributed to her timeless beauty.

Elizabeth’s wedding dress, designed by Court Designer Sir Norman Hartnell, was a strapless dress that had long sleeves, which provided the royal princess with a fit and flare silhouette. Inspired by Primavera, artist Botticelli’s 1482 painting, her satin wedding dress featured gorgeous embroidery motifs of scattered flowers and an elaborate tulle veil (made from silk and ivory), with the latter secured with a diamond fringe tiara. Her dress was also adorned with 10,000 seed pearls, imported from the United States.

One of the dress’s eye-catching features was the star-patterned, fan-shaped bridal train, which was 13 feet long. This princess wedding dress’s train, apart from completing Elizabeth’s bridal look, symbolized the country’s post-war birth and growth.

Due to austerity measures following World War II, Elizabeth had to use clothing ration coupons to earn her entitlement to her wedding dress. The government allotted 200 extra ration coupons, as well as 100 clothing coupons from other brides-to-be. However, the princess had to return them since it was illegal for the coupons to be given away in the first place.

Princess Anne, Queen Elizabeth’s only daughter, wore a wedding dress designed by Maureen Baker, the chief designer of Susan Small, a ready-to-wear label. Her bridal attire was embroidered ‘Tudor-style,” which featured medieval sleeves and a high collar. Lock’s Embroiderers, a popular embroidery brand in the United Kingdom, embroidered her train.

The princess was said to have designed many aspects of her wedding dress. Unlike the lavish line of royal princess wedding dresses preceding hers, Anne’s gown was simple and was noted for being closer to contemporary 1970s fashion.

Diana’s wedding will forever be the stuff of magical wedding dreams (despite the tragic end of her marriage to Charles). We thought she got the perfect engagement ring already; wait till you see her dress!

The dress, in particular, almost stole the show from the lovely 19-year old bride. Her dress was so gorgeous and highly admired that it is considered one of the most famous princess wedding dresses in the world, as well as one of the most heavily guarded secrets in the world of fashion.

Princess Diana’s wedding dress, designed by Elizabeth and David Emanuel, used woven silk taffeta made by Suffolk’s Stephen Walters. Her dress was crinoline, which was considered a symbol of grandiosity and sexuality, and a meringue embroidered with sequins and pearls; the bodice decorated with fancy lace.  The bride’s gown was decorated with sequins, hand embroidery and 10,000 pearls — all centered on a heart motif. As a sign of good fortune, the designers stitched an 18-karat gold horseshoe into her petticoats. Finally, the lace used for her dress was made from antique Carrickmacross lace.

With all the fancy details, it’s only fitting to ask: “How much is Princess Diana’s wedding dress worth?” Her antique lace and ivory silk taffeta wedding dress, with a 153-yard tulle veil and a 25-foot train, is valued at £151,000, which is about $250,000 today.

Sarah Ferguson (also known as Fergie), Duchess of York, may have her share of unsolicited publicity a few years after her wedding, but most people will also remember how she shined on her special day.

Designed by Lindka Cierach, Sarah’s dress was made from ivory and satin with beadwork that incorporated a variety of symbols: anchors and waves (representing Prince Andrew’s sailing background), hearts (representing romance) and thistles and bumbles (taken from Sarah’s heraldry).

Influenced by her sister-in-law Diana’s wedding dress, Sarah’s gown also featured a 17-foot long train that had her and Andrew’s initials sewn in silver beads. Her bouquet and head-dress, artificial silk flowers or rosettes adorned her dress.

The engagement of Diana’s son Prince William to Catherine Middleton (popularly known as Kate) almost caused a media frenzy similar to the nuptials of Diana and Charles. The buildup to the wedding and the smaller details regarding the occasion attracted the public’s eye: from Kate Middleton’s engagement ring up to the guests of the wedding.

Of course, Kate’s dress was the talk of the town.

According to official statements, Kate wanted to combine traditional and contemporary styles that characterized the work of Alexander McQueen. She worked closely with McQueen designer Sarah Burton to achieve her ideal design.

On her wedding day, Kate wowed the guests with a simple yet very elegant wedding dress. Her gown’s ivory satin bodice was slightly padded at the hips and narrowed at the waist. The bodice also featured floral motifs, which were then applied to the tulle. On the back were 58 buttons of organza and gazar, fastened with rouleau loops.

The main body of her dress was made from white satin gazar and ivory, using local fabrics. She also had a long, full skirt designed to look like a flower in bloom, with soft pleats unfolding to the floor. To add a “something blue” to her dress, the designer sewed a blue ribbon inside. For her something old, her dress used 19th-century style lace.

Meghan and Prince Harry announced their engagement on November 27, 2017, but speculations about the bride’s gown had started even earlier. Some commentators believed that Meghan would not wear white since she had been married before. Despite the endless talks about her dress, Meghan shut down all speculations when she astounded everyone on her wedding day.

Meghan’s dress is a simple silk white gown with an open boat neckline, three-quarter-length sleeves and a train with a built-in organza underskirt. Unlike the other royal wedding dresses, her gown was without lace or any fancy embroidery. The unique piece of her gown was a piece of the blue dress she wore on her first date with Prince Harry, which was stitched into her wedding dress.

As for the veil, Meghan’s measured 16-feet long and was hand-embroidered with symbolic sprays of wheat and a variety of flowers on the hem.

Sarah Ferguson’s oldest daughter, Princess Beatrice, took a nostalgic route down the wedding dress selection road. Her bridal dress was loaned to her by her grandmother Queen Elizabeth. Sir Norman Hartnell’s design saw the altar again, only this time it had a few changes.

The vintage creation, made from organza and Peau De Soie taffeta, was encrusted with diamante and trimmed with Duchess satin. Beatrice paired her grandmother’s gown with Queen Mary’s diamond fringe tiara, the same sparkler Queen Elizabeth wore on her wedding day.

Fergie’s youngest daughter, Eugenie, decided to take a quite different yet very pleasant approach to her wedding attire. For starters, she skipped the traditional wedding veil and wore a tiara on her head instead.

Second, she wore a long-sleeved, low-backed ivory gown designed by Christopher De Vos and Peter Pilotto. Her simple wedding dress is a statement. Eugenie decided to wear a dress that accentuated her scars from her scoliosis surgery, which she had when she was a child. The scar is a key part of Eugenie’s identity, which she didn’t wish to hide on her wedding day.

If you take a close look at the fabric of her gown, you’ll also see four symbols embroidered on it: a shamrock for Ireland, paying homage to Sarah Ferguson; the thistle for Scotland; the ivy, which represents the couple’s home and the York Rose.

If you are looking for inspiration for dresses (or even the best wedding band in town), look no further than the Royal Princesses of the UK.