Add Magic to Life by Marathoning All the Barbie Movies 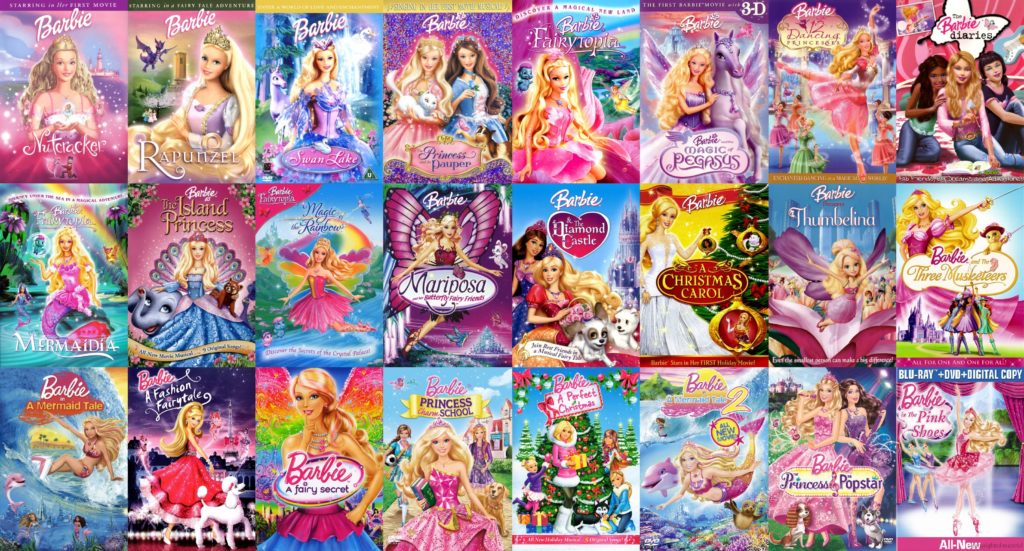 Ever since her sparkling debut in 1959, Barbie has been the playmate and icon of almost every little girl out there. It may be a running joke but Barbie truly has played every role possible: doctor, teacher, model, princess and movie star, with the last one being her second actual role as Barbie also reigns supreme on-screen.

Her talent of singing and dancing combined with her love for adventure makes for good Barbie movies — especially the iconic ones.

So if you’re looking for more ways to kill time during the extended quarantine period, watch all of the Barbie movies in order! From “Barbie in the Nutcracker” to “Barbie Dolphin Magic,” you’ll never run out of Barbie movies to watch online.

Buckle up, kids and kids at heart. After watching the Disney princess movies in order, start your Barbie movie marathon!  Here are the best Barbie movies to add on your list.

The Iconic Barbie Movies You Should Watch

Barbie in the Nutcracker

In her debut movie, Barbie plays Clara Drosselmeyer, the beautiful protagonist who received a Nutcracker for Christmas. Turns out, her Nutcracker is alive and in search of the Sugarplum Princess — an adventure which Clara unwillingly joins in the first place. After journeying through gingerbread villages and battling the Mouse King’s army, Clara realizes that she is the Sugarplum Princess and the Nutcracker is the missing Prince Eric. In the end, the pair fall in love and mesmerize the viewers with a glamorous ballet sequence.

The magic in “Barbie in the Nutcracker” is from the performances and the music. The dances were choreographed by Peter Martins, the New York City Ballet’s master-in-chief. The movie’s music was performed by the London Symphony Orchestra.

Barbie’s take on Rapunzel follows the typical Rapunzel storyline with a twist. The long-haired princess is still trapped in her tower but in Barbie’s world, she’s friends with a rabbit and a dragon plus she has a magic paintbrush. Her enchanted paintbrush allows Rapunzel’s paintings to come to life. How can we forget the iconic painting and trying of dresses? She put all the royal princess wedding dresses to shame.

“Barbie as Rapunzel” shows Barbie exploring with colors while fighting for her freedom to be with her Prince Stefan and biological parents.

In yet another iconic ballet performance, Barbie takes on the enchanted tiara of the Swan Princess. In this movie, Barbie plays Odette, whose discovery of the magic crystal sets her as the only person who can defeat the evil sorcerer Rothbart. During one of his tyrannical use of magic, Rothbart turns Odette into a swan, cursing her. But the Fairy Queen gives Odette a tiara that partially reverses the spell on Odette, allowing her to be human by night.

Similar to “Barbie in the Nutcracker,” “Swan Lake” mesmerizes viewers with an amazing ballet performance and music reminiscent of the original play by Pyotr Ilyich Tchaikovsky.

Barbie as the Princess and the Pauper

Almost everyone knows this Barbie movie because it’s iconic. This is the first film that featured two Barbies instead of one: Princess Anneliese and Erika the seamstress. Everything about this Barbie movie online is iconic: the gowns, the story (we gotta love and hate Preminger at the same time), the pets and the songs. “I Am a Girl Like You” is such a memorable song, it has turned into a meme.

Out of all the Barbie films, this the one both new and old fans can sing along to with passion.

This 2005 Barbie film is the first movie to have an original storyline. Plus, you get to see Barbie as a fairy, aka the role kids often associate her with.

In this movie, Barbie is Ellina, a flower fairy who doesn’t have wings. Her weakness becomes her greatest strength when the villainess Laverna poisons the rest of Fairytopia, rendering all winged creatures weak. According to the fairy guardian Azura, Elina has a rainbow in her eye, which means she’s destined for great things.

Despite being tempted to betray her fellow fairies for a pair of wings, Elina does what is right and overwhelms the villain. In the end, she is rewarded with spectacular wings (pink, of course!) that would make any child bug their parents for their own pair.

Barbie and the Magic of Pegasus

After taking a break from watching the first Barbie movies in order, “Barbie and the Magic of Pegasus” is a pleasant follow-up since it combines two things: Barbie and gorgeous winged horses. In this story, Barbie is Princess Annika, a slightly rebellious princess with strict parents. On the bright side, she has an adorable polar bear cub called Shiver.

When she refuses to marry a sorcerer called Wenlock, the latter petrifies the entire kingdom, leaving Annika to be rescued by a Pegasus named Brietta, who turns out to be her long lost-sister (shock!). Her sister was transformed into a horse when she refused Wenlock’s marriage proposal, which explained why the King and Queen were strict with her.

Story-wise, “Barbie and the Magic of Pegasus” is a heartwarming tale of family, adventure and horses. The visuals are lovely, especially the Cloud Kingdom. Plus, Barbie’s partner is not a prince or a tutor. Aidan, a blacksmith, isn’t as polite as his predecessors. But he is a softie, with his back story of wanting to ask his parents for forgiveness.

If you can’t get enough of Barbie as a fairy, watch her become a mermaid! In “Barbie: Mermaidia,” Elina is enjoying her new wings when she hears her friend Prince Nalu, the mer-Prince, has been captured by Laverna’s henchmen. She meets with a mermaid named Nori who didn’t like her at first but eventually warms up to her when she realizes she can’t save Nalu on her own.

As a fairy, Elina cannot go to the depths of the water to save her friend. So, she trades her wings for a gorgeous pink tail! In the end, she nearly loses the chance of regaining her wings but Nalu gives her the True-self Berry, which restored her wings.

One of the best things about this Barbie film: she needs no man. Nori disliked her at first because she thought that Elina liked Nalu. Nope. Elina is her own fairy and Nori ended up with Nalu.

This 2006 film is a nice break from watching all the Barbie fairytale films in order. “The Barbie Diaries” portrays Barbie as a regular high school teen dealing with problems real-life teenagers encounter: dating, making new friends, discovering new hobbies and school. There is still magic involved here since Barbie receives charm bracelets, which makes all of Barbie’s dreams come true (specifically the ones written in her diary).

This movie is a typical high school movie, but make it Barbie. Barbie becomes popular but forgets her friends and doesn’t notice the nice guy Kevin (who is in love with her). But in typical Barbie fashion, the movie ends with her realizing she is the magic, not the bracelet. She reunites with her friends and ditches Todd for Kevin.

Barbie in the 12 Dancing Princesses

Barbie returns to her fairytale roots with “Barbie in the 12 Dancing Princesses.” Similar to the Grimm’s fairy tale, this Barbie movie features our favorite doll as Genevieve, one of the 12 dancing princesses. One of the few changes to the Barbie adaptation is the use of books, which revealed the magical land where the girls danced to their heart’s desire.

Seeing 12 Barbies dancing is entertaining. Plus, the prince isn’t a prince. He’s a cute royal cobbler named Derek whose hair is no longer slicked back (unlike the other Barbie princes).

Barbie Fairytopia: Magic of the Rainbow

Elina is back in the third installment of the “Barbie Fairytopia” series. In this film, Elina is the apprentice of the fairy guardian Azura. If you want to know what fairy college is like, this movie is for you. Elina attends classes and learns different techniques from senior fairies. Plus, Laverna finally meets her end by turning into fairy dust.

Barbie as the Island Princess

Barbie never misses out on the opportunity to become a princess no matter where she is. In “Barbie as the Island Princess,” Barbie is Ro, a beautiful young woman living in the South Seas. When she was a child, she was discovered washed-up on the shore by Azul the Indian peacock and Sagi the red panda. Similar to “The Little Mermaid,” Ro saves Prince Antonio from the crocodiles (minus the mermaid tail).

Barbie has a total of 37 movies! The 38th movie is set to be released this 2021 and will feature Barbie and Chelsea. So, if we didn’t list down your favorite, make sure you watch the other Barbie movies like:

Sadly, not all Barbie movies are on Netflix. But some websites offer free viewing of Barbie movies online. So you’ll have to use your sleuthing skills to find all of her films!

De-stress easily and make quarantine more fun by diving into Barbie’s world and watching all of her movies.